skip to main | skip to sidebar

What follows is not an unbiased review. Bunny’s a Swine is a local Northampton band and guitarist/singer Candace Clement is a friend and former Smith student. I like Candace and her band mates Emerson and Dustin, and it so happens that I also like the music their band plays, not just because they’re friends but because they’re good and play music in a style that I like too.

(Truth be told, I don’t always go out of my way to see friends’ bands play and don’t always enjoy myself when I do. I’ve always enjoyed music more when I have a certain detachment from the players so I can inhabit my own little space as a listener who likes to mix it up with other listeners at shows. This is a big part of the reason why I don’t interview musicians as part of my research method. But I digress…) 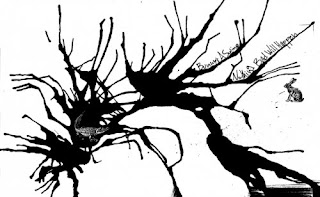 Bunny’s a Swine just produced its first CD, Nothing Bad Will Happen. As far as I know it’s self-released and for the time being at least, not something you can find at a store near you if you’re lucky enough to still have a store near you that sells CD’s by non-big label artists in the first place.

With two guitars and a drummer Bunny’s a Swine has the same instrumental mix as Sleater-Kinney. Like that band, the elimination of the bass gives the sound a certain thinness at times but also creates a more democratic kind of musical palette. The two guitars and the voices of Emerson and Candace interweave and overlap in ways that often make designations like “lead” and “rhythm” irrelevant. Drummer Dustin Cote isn’t super flashy and at times he’s a little bit overwhelmed in the album’s mix but he keeps a solid, steady rocking beat that lets the guitarists wander from melody to noise and back again without getting lost.

In the thank yous accompanying the disc, Bunny’s thanks Guided by Voices and the Breeders, adding that they don’t know either band personally. It’s a statement of influence and lets you know that they’re strongly informed by 1990s indie rock and lo-fi (as does the Sleater-Kinney instrumentation). But the band’s proclivity for floating bursts of guitar noise is more reminiscent of the likes of Pavement and at times Sonic Youth. If this sounds like a band that wears its influences on its sleeves, well … is that a bad thing? Not to me, at least not when those influences are great and are all combined in a way so that they’re mixed together with a lot of creativity. This isn’t an album where there’s one song that sounds like Pavement and another that sounds like GBV. It’s an album where the influences merge on every track to make for a band that is more than the sum of its record collection.

Generally speaking, the first half of Nothing Bad Will Happen is a bit slower and more tuneful, and the second half is more riff-laden and rocking. I like the riffy stuff more because that’s where my tastes lean but the opening several songs have some great moments. The biggest surprise for me, having heard the band a few times in concert, is the quality of Candace’s vocals. Usually the “second” voice behind Emerson’s, her singing has an ethereal character unlike what you usually hear in this type of rock, a quality sometimes lost in the mix at their live shows. It makes for a rich contrast with Emerson’s throatier voice, which veers between ironic detachment and an almost unhinged mania that could pass for David Yow of Jesus Lizard.

Fave tracks include opener “Moose-Cow,” which features the contrasting voices of Emerson and Candace to good effect and also has a neat cloud of delay that arises in the chorus; “Vallum Bread,” which opens with a cool guitar line; and “Hatesong/Lovesong” and “Multiple Ex’s,” where the band’s rockier tendencies hold sway. Like any good indie band Bunny’s a Swine has multiple forms of web presence; the curious can visit http://bunnysaswine.wordpress.com, which will lead to other points of interest.
Posted by Axman at 5:05 PM

More blogs to stimulate the senses

Axman
Northampton, MA
Axman is Steve Waksman, a professor of music and American Studies at Smith College, author of Instruments of Desire: The Electric Guitar and the Shaping of Musical Experience and a new book on heavy metal and punk.